I did something yesterday that I haven’t done in a really long time: I went to a performance that I wasn’t directly responsible for… and flippin’ loved it. The New Brunswick Cultural Center, a client of mine is sponsoring Hub City Sounds, a series of free outdoor performances through the end of September in New Brunswick’s Boyd Park. So while I am not directly responsible for the series, I am keeping their website updated.

Even though I was not directly involved, I found a way to involve myself.
You can take the kid out of the arts world, but you can’t take the arts world out of the kid. I was there to enjoy the afternoon in the beautifully re-built Elmer B. Boyd Park along the Raritan River in New Brunswick. The park renovations include a great new amphitheater with the river as the backdrop. Before I even stepped foot in the park, I found myself with the urge to tweet the photo above out:

Setup for Jazz in the Park show #hubcityfest @ Elmer B. Boyd Park http://t.co/9BUBeatS

From that point on, I appointed myself the unofficial Tweeter of the concert. I tried not to go too overboard with the photos, but managed to send out 10 photos of the event as it was happening, and still managed to be mesmerized by the music.

Live performances make me a super fan.
I’ve known about the two headliners of the concert for a while: Winard Harper and Arturo O’Farrill. I’ve heard their music on WBGO a thousand times. However, I don’t actually own any of their music. That’s changing soon. As I write this, Arturo O’Farrill is on my Spotify, with Winard Harper lined up next. Now I’m normally not a huge fan of Spotify because of their insurmountable revenue model for artists, but I find myself a little short on the music budget this month (yes, I have to limit myself) so the need for instant gratification has pushed my to Spotify.

Seeing an artist perform live usually pushes me into a period of listening to nothing but that artist for a while. I’m a musical obsessive that way. So Arturo & Winard (I like to imagine we’re on a first name basis now) you guys are on deck for next month’s music budget, I swear.

Shows like yesterday’s concert bring out the “We Are The World” in me.
One of the things I love about the arts in general, but jazz specifically, is that they can, if even just for a few moments, transcend everyday cultural divisions, and bring communities together that would normally not get together. Looking at the crowd in Boyd Park yesterday, there were a dozen ways to divide people into their own socioeconomic, racial, and demographic little boxes. However, no one did. We were there, as a community, transcending the usual, and enjoying the music, the setting, and being part of a community of neighbors. Young, old, Black, White, Latino, Asian, left, right, whatever box you fit into, it was 3 hours of forgetting the box and having a great time.

3 hours of peace, music, and some pretty damn good carne asada tacos; not bad for the free price of admission.

I’m a dyed-in-the-wool people watcher.
Whenever I’m in a situation like yesterday’s concert, I do almost as much people watching as I do music listening. The power of the event is always stronger than just the force of the artistry happening on stage, and that’s it’s own little bit of awesome. Whether it was watching the nervousness of the kids from the New Brunswick District Jazz Band before they went on, to overhearing bits of conversations, to me, the crowd is as entertaining as the artists.

My favorite overheard quote from one older gentleman to another during the Winard Harper set:

These young cats aren’t half bad.

Looking forward to next weeks concert with The Fins.

Here are my photos of the event: 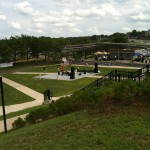 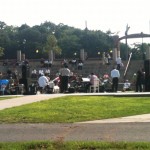 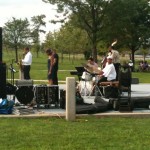 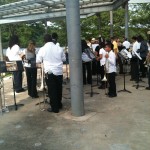 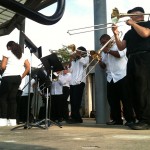 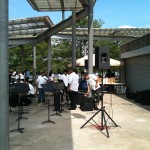 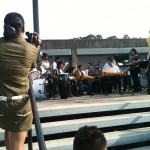 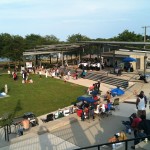 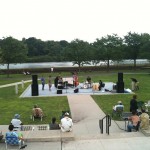